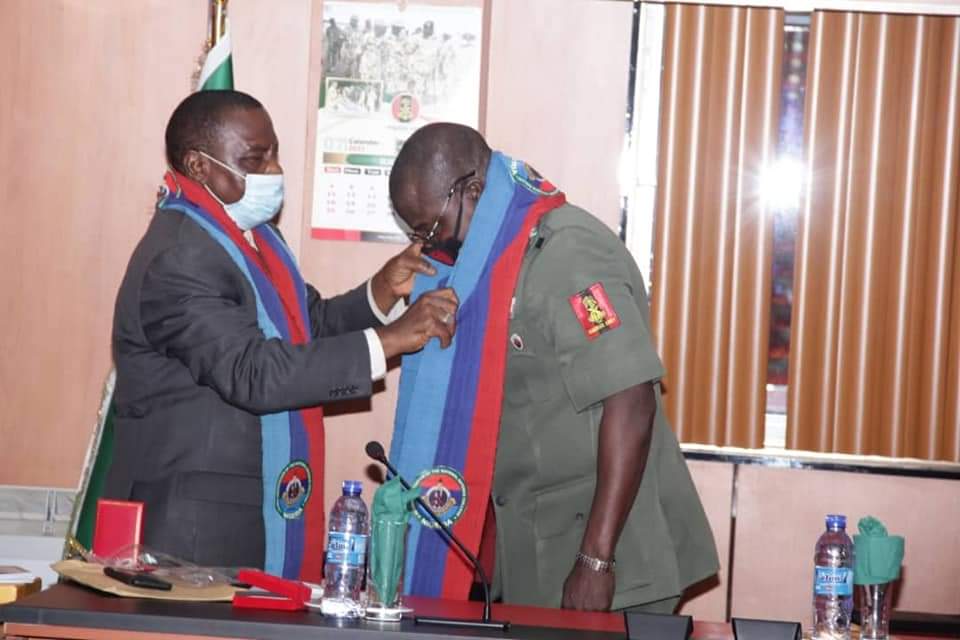 The Alumni Association of National Defence College Nigeria (AANDEC), led by its President, Major General Garba Audu (rtd) today paid a visit to the Chief of Army Staff (COAS), Lt Gen Faruk Yahaya, during which members of the Association reiterated their commitment to national security.

Gen Garba (rtd) disclosed that the Association was at the Army Headquarters to  confer with the COAS, who is a Patron of the Association, noting that the Nigerian Army has the highest number of participants in the College. He also congratulated the COAS on his appointment as the 22nd Chief of Army Staff.

General Audu  explained that AANDEC is composed of graduands of the National Defence College, both serving and retired personnel, adding that it was established to prepare selected senior officers of the Armed Forces, para-military and civilians in relevant government establishments for higher level of command and staff function.

He noted that AANDEC has enrolled in numerous endeavours, among which are annual security seminars and discussions, as well as publication of AANDEC journal. He  pointed out that the Association is partnering the Federal Government in the area of national policy formulation, as well as contributing positively to national security.

While appreciating the COAS and Principal Staff Officers of the Army Headquarters for their untiring efforts at curbing insecurity in the country, he appealed to institutions and partners who subscribed participants to support the Association in order to collectively build a befitting AANDEC.

In his response, the COAS reaffirmed his readiness and commitment to assist the Association in its endeavours . He described AANDEC as an agent of organizational change, noting that the Association has satisfactorily contributed to the growth and development of the services.While appreciating AANDEC for submitting its thoughts on the issues of security, Gen Yahaya averred that the Nigerian Army remains resolute in the protection of lives and property of citizens in the country. He however solicited the support and understanding of the general public to provide credible information that will assist the NA to stem the tide of terrorism, insurgentcy and other sundry crimes in the country.

Present at the occasion were Principal Staff Officers and Directors of Army Headquarters among others.

Highpoint of the visit was the decoration of the COAS with the Association’s muffler.